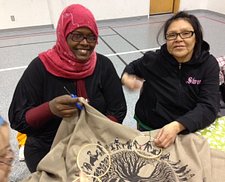 Our organization's concept grew out of a collaborative art project between First Nations and recently immigrated mothers in Winnipeg's North End in 2015.

First Nations. All Nations. One Nation.

Inspiration: The city of Winnipeg has the largest Indigenous population of all major Canadian cities. In 2014, Manitoba welcomed the highest recorded number of refugees per capita in Canada.  This same year,  a North End drop-in for mothers and young children hosted “First Nations, All Nations: Setting the Table”: a sharing circle/art project to bring together indigenous mothers with their newcomer neighbours.

Conversation: Once a week for 6 weeks, 15-25 women gathered in Turtle Island Neighbourhood Centre to meet, enjoy cultural foods and learn phrases from each other’s languages.  We shared childhood stories, values we were taught as children, and dreams for own sons and daughters.  We spoke, wrote, sculpted and drew.

Creation: Professional printmaking artist Karen Cornelius integrated our stories and drawings into a beautiful “One Nation” emblem.  This emblem was silkscreened onto a tablecloth for each women’s home, symbolizing the belief that how we "set the table" together today will determine the atmosphere around the table when our children sit down to join us.  We collectively embroidered and beaded two of these tablecloths.

Expansion: This same emblem was silkscreened onto fabric panels and sewn into striking canvas bags as varied and colourful as the women themselves.  Sewing machines were purchased, women were offered free sewing instruction, and these bags began to be be produced for sale in the community.

Women trained in sewing the bags were given kits to sew together over the summer, along with new sewing machines and the opportunity to purchase them at a reduced cost.  The Canadian Museum for Human Rights began selling One Nation bags in their gift boutique, while consumer demand continued in the greater community.

One Nation:  With the assistance of SEED Winnipeg in 2016, we further developed our vision for a social enterprise focused on creating opportunities for intercultural exchange, training, and employment for women representative of Canada’s diverse cultures.

On International Women’s Day 2017, our not-for-profit incorporation papers were submitted and One Nation Exchange was born.

Due to pandemic precautions, our programming ceased in March 2020 and we are currently in the process of restructuring our programme for the future. If you would like to be contacted when our drop-in programme begins again, or if you would like to place an order with our One Nation Exchange participants sewing from home, please email us at onenationexchange@gmail.com.